There’s no better measure of Surfrider Foundation’s impact in protecting our ocean, waves, and beaches than the number of coastal victories we achieve each year. By this standard, Surfrider enjoyed our most successful year ever with 82 victories in 2018, smashing our previous record of 61 campaign wins from 2016. We are proud to be the most effective group advancing coastal and ocean conservation in an era of disregard for environmental protections.

Over half of Surfrider’s victories in 2018 resulted from campaigns designed to tackle the global plastic pollution crisis that is suffocating marine life and invading every area of the ocean. Led by our chapters across the country, we secured 51 plastic pollution victories to curb wasteful consumption of plastic bags, straws, foam containers, and other single use products. We also fought statewide policies that prevent local governments from enacting plastics reduction laws and pushed for stronger federal leadership through passage of the Save our Seas Act.

Surfrider also secured major campaign victories on other environmental priorities. In February, we helped save funding for coastal management and beach water quality testing in the 2018 federal budget. In October, we restored public access to Martins Beach in California after nearly a decade of advocacy and litigation. Finally, we helped pass state offshore drilling bans in California and Florida to push back against the Trump administration’s plans to expand offshore drilling in federal waters.

Yet, Surfrider’s impact in 2018 went far beyond our campaign victories. Our volunteer efforts grew by leaps and bounds, engaging over 63,000 people in coastal stewardship efforts. From water quality testing to beach cleanups to the registration of Ocean Friendly Restaurants to community events, Surfrider demonstrated the power of citizen engagement. Indeed, amidst a backdrop of political division across the U.S., our grassroots approach united volunteers and communities to tackle the many challenges facing our coastlines.

Below is a summary of some our 2018 achievements across each of our focus areas. We extend a heartfelt thank you to all of our chapters, volunteers, supporters, and partners who contributed to this success!

Surfrider secured 51 victories to reduce and prevent the harms of plastic pollution on our coastal environment. Notable wins included passing a statewide ‘Straws Upon Request’ law in California, passing strong policies in Charleston, SC; San Francisco, CA; and Portland, OR to reduce plastic consumption, and defending the right of municipalities to address plastic pollution with local solutions in South Carolina. Surfrider’s network also tackled plastic pollution through organizing over 900 beach cleanups through the Better Beach Alliance and registering nearly 400 restaurants in our Ocean Friendly Restaurants program.

Surfrider secured 10 victories to protect water quality at the local, state, and national levels. We led a coalition to save federal funding for the BEACH Act to monitor water quality at beaches nationwide. On the Oregon coast, we worked with city staff and local partners to solve pollution problems. In Puerto Rico, our Rincón Chapter protected public health in the aftermath of Hurricane Maria by monitoring critical sources of freshwater when electricity and other government-supplied services were off-line. And in Hawaii, we passed the nation’s first ever reef-friendly sunscreen policy to protect marine life from harmful chemicals. These victories were complemented by Surfrider’s volunteer monitoring of hundreds of beaches, installation of Ocean Friendly Gardens, and numerous community partnerships to solve local pollution problems.

Surfrider secured 5 victories to protect ocean ecosystems in U.S. waters in 2018. Notable wins included saving NOAA ocean management programs, banning offshore drilling in California and Florida state waters, finalizing a Marine Spatial Plan in Washington, and establishing a Florida Coral Reef Protection Area. Surfrider also fought the Trump administration’s offshore drilling plans by mobilizing thousands of people to engage in meetings, rallies, and comment periods. Our Stop Offshore Drilling campaign will continue in the coming year with a final decision from the federal government expected by the end of the 2019.

Surfrider secured 9 victories to protect U.S. shorelines from coastal development and climate change. Notable wins included protecting California’s coast from seawalls through a coastal commission decision in Laguna Beach, advancing restoration of Ocean Beach in San Francisco, and passing climate change legislation in Hawaii. We also mobilized our chapters to participate in the Peoples Climate March across the U.S. and served as an official delegate at the Global Climate Action Summit in September. Finally, Surfrider released the State of the Beach Report Card in December, generating national media coverage on state beach preservation policies.

Surfrider won 7 victories to protect and improve coastal access in the states of California, Florida, Michigan, and Hawaii in 2018. We celebrated a monumental victory at the U.S. Supreme Court to open Martins Beach, which billionaire Vinod Khosla has been blocking since 2010. Other notable wins included preserving access at Kahala Beach on Oahu, ensuring equity at the Mavericks Surf Contest, and protecting Great Lakes beach access through a Michigan Supreme Court ruling. Finally, Surfrider chapters and clubs partnered with community groups across the U.S. to help bring thousands of underserved youth to the coast. 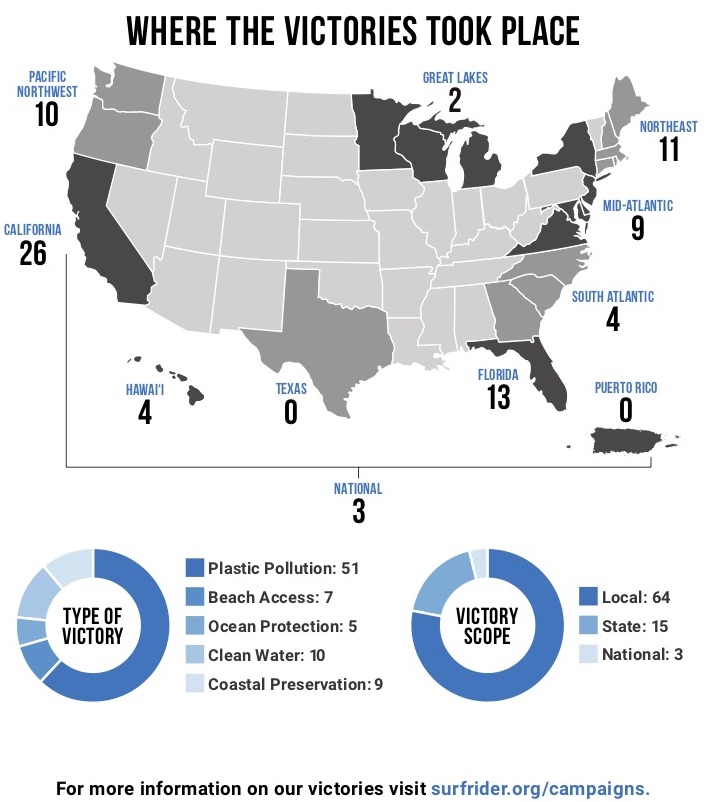